Daughter follows her father's footsteps from the OC to Pago Pago 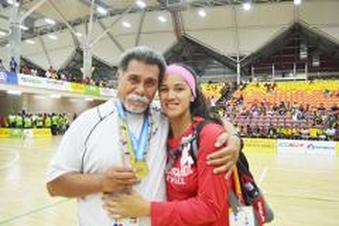 PORT MORESBY — Two-time Pacific Games gold medalist Maxwell Tuioti-Mariner believes that the opportunity which allowed his daughter Nora Sharma Tuioti-Mariner to play for the American Samoa Women’s National Volleyball Team in the XV Pacific Games, is a fulfillment of his dream that he would give something back to American Samoa, for giving him the green light to represent the Territory at the 1979 and 1983 Pacific Games as part of the Men’s Volleyball National Team.

Tuioti-Mariner is the manager for the Women’s Beach and Indoor Volleyball Team that won two gold medals for the Territory at the XV Pacific Games last week.

In an exclusive interview with Samoa News in Port Moresby, Tuioti-Mariner shared his feelings of happiness when the women’s national volleyball team won a gold medal in Papua New Guinea, for the first time ever in history.

Tuioti-Mariner, is a Samoa national, who was living with his family in the US when he heard that the Volleyball Association of American Samoa was looking for the best team to represent the Territory at the 1979 Pacific Games in Fiji.

“There were six of us who came down from California and we met up with the other six volleyball players in American Samoa, where we trained together under the leadership of Coach Pio Gaisoa, before heading out to Fiji to play,” Tuioti-Mariner remembered.

“I was the only member of our team from Samoa, as all others were from American Samoa,” he said.

“At the Pacific Games, Tahiti, New Caledonia, and Fiji were the only teams that were favored to win the gold medal. No one wanted to mention American Samoa as a team to watch out for. Instead, they just treated our team as a newcomer with no experience, not a favorite to win gold.”

He continued, “Our team did not have the experience, compared to other good teams like Tahiti, New Caledonia and Tahiti; but our bond kept us together and that was our strength, which drove us from the beginning up to the final match, where we defeated the 1974 Pacific Games gold medal team from Fiji to win gold for the first time.”

According to Tuioti-Mariner, “The Pacific nations were shocked when American Samoa defeated Tahiti and New Caledonia and went on to play against Fiji in the gold medal match. We won the [men’s] title for the first time ever.”

He continued, “We then went to Samoa after four years during the 1983 Pacific Games and we managed to defend our title, a back-to-back win for American Samoa.”

During the 1991 Pacific Games, which was then known as the South Pacific Games, in Papua New Guinea, American Samoa failed to defend their title when they lost to Tahiti and ended up with the silver medal.

Before playing for American Samoa, Tuioti-Mariner said that he doubted at the time whether American Samoa would allow him to play for their national team in the Pacific Games; but when the government gave him the green light, it was a great feeling for him at the time.

“That’s why it means a lot to me, because American Samoa gave me the chance to try out and compete for their men’s national team,” he said. “That’s why deep in my heart I told myself that one of these days, if God will prolong my life, I will come back to American Samoa and give something back to the community. It’s something that I was thinking about for many years. I promised God that I will give something back to the American Samoa community — if it’s not my kids coming back to play for the national team, maybe I will come back and build another clinic to help promote volleyball and encourage young people to play this sport.”

During the recent Pacific Games, Tuioti-Mariner was always on the sideline, every time both the men’s and women’s volleyball teams played, even during the beach volleyball games.

Before the team departed for PNG, Tuioti-Mariner told Samoa News that he shared his experience with the team, and encouraged them to play from their heart.

“I told the team, you’re not playing for your village or for your family, you’re playing for the national team of American Samoa, and playing against some of the top teams in the Pacific and defeating them all is a good way to layout the message to all the Pacific nations that if they can do it, American Samoa can also do it.”

When asked about his feelings when the women’s national volleyball team won the gold medal, with his daughter as part of that team, Tuioti-Mariner said he was overwhelmed.

“It was a great feeling for me,” he said with tears in his eyes. “I was excited when I saw the team win the gold medal. It’s something that I was dreaming about for many years, for me to come back home and give back something to the community. The moment they scored that winning point, I just focused my eyes on my daughter, and my heart was crying when I saw her jumping up and down, before she ran straight to me and hugged me and said, ‘Daddy, Daddy this is for you’.”

Tuioti-Mariner continued, “When you stand there at the top of that podium watching the flag of your country rise and rise and rise above all other flags, that’s the most gratifying feeling, because when you look at your country’s flag, you can see the whole picture of your country, and then from that very moment it can seal your feelings of continuing to play for your country.”

Before leaving for the states last night, Tuioti-Mariner said that as long as he lives, he will continue to give back to the community, by supporting the volleyball team in future Pacific Games, with the government’s blessing.

- See more at: http://www.samoanews.com/content/en/two-time-gold-medalist-tuioti-mariner-reflects-journey-xv-pac-games#sthash.TN1JOOE8.HRzvNEJR.dpuf
Powered by