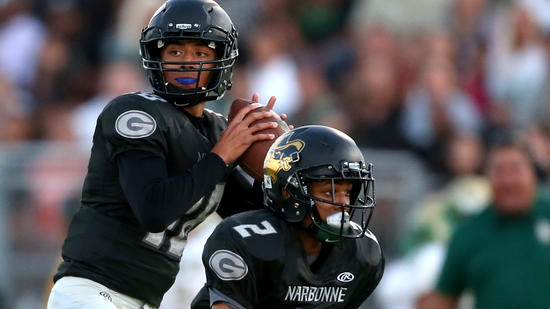 ​For weeks, Harbor City Narbonne Coach Manuel Douglas has been exhorting his team to avoid complacency as the Gauchos routed one opponent after another. The reward came Saturday when Narbonne (8-2) was seeded No. 1 for the City Section Division I football playoffs.
Lake Balboa Birmingham (7-3) is No. 2, followed by No. 3 Garfield (8-2) and No. 4 Dorsey (5-5).
"That's the thing we've been fighting all year long," Douglas said, "and I keep reminding our team. The emphasis is on playing at a high level."
The bad news for opponents is that Narbonne is injury free. Even running back Justin Franks, sidelined since Narbonne's third game of the season against Gardena Serra, has returned.
First-round games are set for Friday. Narbonne will host Northern League champion Eagle Rock (6-4), the No. 16 seed. Among the best openers are No. 9 South Gate (8-2) at No. 8 San Pedro (6-4), No. 12 Sylmar (8-2) at No. 5 Taft (8-2) and No. 10 Venice (5-5) at No. 7 Arleta (10-0).
Los Angeles (9-0-1) is the No. 1 seed in Division II, with Belmont (10-0) No. 1 in Division III.
The City finals will be Dec. 5 at Cerritos College.
No Long Beach Poly
For the first time since 1979, Long Beach Poly won't be in the Southern Section playoffs. The Jackrabbits (4-6) had to forfeit four victories because of an ineligible player, then lost out in a tiebreaker procedure to determine third place in the Moore League and a Pac-5 Division playoff berth.
Three schools that tied for third place were put into an envelope Friday night. The first school name pulled from the envelope was eliminated, and that was Poly. Long Beach Jordan won out over Long Beach Cabrillo because of a win in the head-to-head matchup.
There are two at-large berths available in the Pac-5 that will be announced Sunday morning, and Westlake Village Westlake (7-3) and West Hills Chaminade (7-3) appear to be the leading candidates.
Among the noteworthy regular-season final games Friday, Pasadena won its first game over rival Muir in 20 years with a 13-6 victory.
Chaminade upset Gardena Serra, ranked No. 3 by The Times, 38-21. Senior receiver Jordan Chin had 10 receptions for 154 yards and one touchdown. Dymond Lee completed 23 of 33 passes for 278 yards. Sophomore T.J. Pledger rushed for 144 yards and scored three touchdowns.
Los Angeles Loyola (8-2), the third-place finisher in the Mission League, will be without sophomore linebacker Jackson Sirmon (10 sacks) in the Pac-5 playoffs after he suffered a knee injury on Friday night jumping up and down celebrating.
eric.sondheimer@latimes.com